Review of Not a Guide to Harrogate by Trish Colton 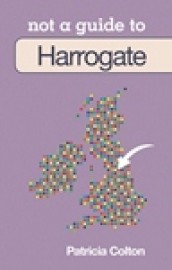 This book is small in size but packed full of interesting facts about Harrogate and District. It is suitable for locals,  the genealogist who has ancestors in Harrogate and tourists. There is a pleasing combination between the attributes of the town and the famous “must visit” attractions such as The Stray, RHS Garden at Harlow Carr and Betty’s Cafe Tea Rooms. It reminds the reader that Harrogate isn’t just about antiques and chocolate shops and that it rose to fame as a spa town famous for “taking the waters” from its sulphur well combined with massage treatments and inhaling the bracing air. It names the suburbs giving interesting facts about each one such as Duchy, Knox and Woodlands. Some oddly named street names are given such as Water Bag Bank, Barefoot Street and Penny Pot Lane.
Also of interest to the genealogist is a list of Castles and Battlefields in the local area including the more famous Battle of Marston Moor on 2 July 1644. I especially enjoyed the Historical timeline which shows that Bilton, a suburb of Harrogate existed in 700 and Sir William Slingsby discovered spa water at Tewit Well on the Stray. There is a section on Harrogate in the Wars which includes some servicemen and the 5 men who were awarded the Victoria Cross. The local cemetery at Stonefall is mentioned for its military inhabitant. Several famous people have been noted such as Blind Jack of Knaresborough, Mother Shipton, Betty Lupton and Samson Fox, Mayor from 1890-92 although more recently acknowledged as the forebear of the Fox acting dynasty and featured on Who Do You Think You Are. The Ingilby family who have lived for seven generations at Ripley Castle are mentioned for their connection to the Battle of Marston Moor and association with the Gunpowder Plot. More unusual facts such as the Knights Templar preceptor at Little Ribston are cited as well as famous local businesses such as Farrah’s of Harrogate who originally made toffee to take away the awful taste of the sulphur water. This little book does not give detailed history however it does give a flavour of our lovely town in bite sized chunks. It certainly taught me a few unknown and interesting facts.
Review of Not a Guide to Harrogate by Trish Colton was last modified: May 15th, 2020 by Pam Smith

Categorised in: Our Blog